The active cycle of breathing technique

The active cycle of breathing is a technique used for:

clearance of excess secretions from the lungs

improving ventilation of the lungs

The technique can be performed in any breath enhancing position and no equipment is required. When used to clear secretions, it may also be effective when performed in the shower, where steam can assist with the humidification of the airways.

The flexibility of the regimen (the number of deep breaths, the number of huffs and the length of the periods of breathing control) and order of the components varies with the patients’ condition and should be adapted to suit the individual (Fig 1). Each component plays a key role in the clearance of secretions.  A longer period of breathing control is generally required in the presence of wheeze, shortness of breath, an irritable cough and anxiety. A typical cycle of ACBT consists of:

breathing control (until the patient is settled and ready to commence)

huffs – at the appropriate inspiratory volume, depending on the position of the sputum

Huffing after each set of thoracic expansion exercises is generally required when there are larger quantities of sputum to be cleared which may vary on a daily basis. With small amounts of sputum the patient may only need to huff at the end of each cycle.

The cycle is repeated until the huff is non-productive or it is time for a rest.

It must be explained to patients with mild disease that this technique may not result in the expectoration of any sputum. The cycle may move the small amount of sputum out of the peripheral airways and, with the assistance of the muco-ciliary escalator in the non-affected parts of the lung, it may be swallowed or coughed up an hour or so after practicing the technique.

position (as prescribed by therapist – either sitting, side lying, supine or prone)

after bronchodilators (if prescribed)

repeat cycles as prescribed by therapist

most sessions will take approximately 10 minutes

extra sessions may be required during an exacerbation

with or without a prescribed nebuliser

The patient should be given written instructions including the technique and prescription.

When this technique is taught in the sitting position, the importance of the correct posture should be explained to the patient.

Instruct them to sit in a well-supported chair with a neutral lumbar spine and the neck and shoulders relaxed. This enhances the function of the diaphragm and the pelvic floor and minimises musculoskeletal stress (Fig. 2). 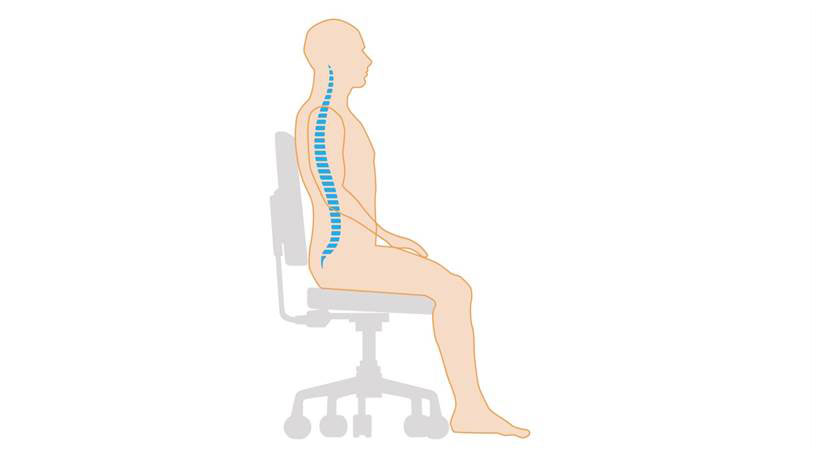 Breathing control is the period of relaxed breathing, at the patients’ own rate, between more active parts of the cycle.

Patients should be encouraged to breathe in through their nose to humidify, warm and filter the air and to decrease the turbulence of inspired flow.

It is tidal volume breathing, preferably with the neck and shoulders relaxed and the diaphragm contracting for inspiration. It assists with recovery from shortness of breath, fatigue and signs of bronchospasm.

Breathing control should continue until the person feels ready to progress to the other stages in the cycle.

Physiology – Breathing in a slow and relaxed manner reduces the work of breathing and consequently the oxygen requirements. Hyperventilation is also a known trigger for bronchospasm in some people (Van den Elshout et al 1991).

Thoracic expansion exercises are deep breathing exercises which focus on inspiration. The patient is instructed to breathe in slowly and deeply (preferably through their nose, unless they are using a nebuliser) with minimal accessory muscle use. When a maximal inspiration has been achieved, the patient may be asked to do an end inspiratory breath hold for three seconds before passive expiration. This is repeated for up to five breaths.

To facilitate a maximal inspiration, proprioceptive feedback, with the therapist, or patient, placing their hands on the thoracic cage, can be beneficial. This has been associated with increased chest wall movement and improved ventilation (Tucker 1999).

Physiology – Large inspiratory volumes are believed to facilitate collateral ventilation . This can be further enhanced by a breath hold. (Menkes & Traystman 1997). Resistance to airflow within the canals of Martin, channels of Lambert and Pores of Kohn, (between the bronchioles and alveoli), is usually high, with little movement during tidal volume breaths. With increasing inspired volumes, the resistance decreases and air flows through these channels to enhance expiratory flow behind the secretions (see Fig 3). At high lung volumes, achieved during thoracic expansion exercises, the expanding forces between alveoli are greater than at tidal volume and may assist with the re-expansion of lung tissue. This is known as alveolar inter-dependence (Fig. 4). During inspiration, the expanding alveoli exert forces on the adjacent alveoli which enhance the recruitment of lung units.

A breath hold can be added to the deep breath to compensate for asynchronous ventilation which may be present in some respiratory conditions due to sputum retention and / or atelectasis. During inspiration, healthy lung units fill rapidly whilst obstructed lung units fill more slowly. Units slower to fill will partially receive their inspired volume via the collateral channels (described above) from more rapidly filling units (Mead et al 1997).

A huff (also called the forced expiration technique [FET] when combined with breathing control) is a manoeuvre used to move secretions, mobilised by thoracic expansion exercises, downstream towards the mouth.

When initially taught, the patient is instructed to take a medium breath in and to breathe out with mild to moderate force and extended expiratory flow, with the glottis open. The length of the huff and force of contraction of the muscles of expiration should be altered to optimise clearance of secretions (Pryor & Prasad 2008) by maximising air flow.

For patients with the cognitive ability, three levels of huffing can be taught. The patient is instructed to huff with first small, then medium and finally, large volume inspiratory breaths, to assist in moving secretions from the peripheral airways, through the medium airways, towards the mouth. With all of these inspiratory volumes, the expiratory force and length of expiration are the same (see the physiology section below).

To facilitate the opening of the glottis, the patient can be taught to perform a huff with a piece of cardboard spirometry tubing (or any tubing of a similar diameter) placed at least four centimetres inside their open mouth (Fig.5).

If taught appropriately, the FET is probably the most effective airways clearance technique (van der Schans 1997). Physiology – The rationale behind a huff is based on the equal pressure point (EPP) – the point at which pressure within the bronchi equals peri-bronchial pressure (outside the airway).  (Fig. 6).

During normal respiration, the EPP occurs in airways protected by cartilaginous rings which help to prevent airway collapse. ACBT has been found to be an effective technique for clearing secretions in patients with both acute and chronic respiratory conditions. The majority of studies have included people with cystic fibrosis (Lewis et al 2012).

Over the long term, similar effects on lung function, exercise capacity and quality of life were demonstrated between various airways clearance techniques (Pryor 2010).