NTM are important environmental pathogens that have been recognised as a cause of pulmonary infection for many years, cause significant morbidity and mortality and can infect patients with pre-existent lung diseases, particularly bronchiectasis.

Infection is often associated with increased pulmonary and systemic symptoms and decline in lung function. NTM can also infect at risk individuals and be associated with the development of bronchiectasis, small airway mucous plugging and nodules.

As NTM organisms are commonly occurring microbes in the environment (particularly soil and water), patients are regularly exposed and screening should occur at regular intervals.  Clinicians need to be astute in assessing the significance of NTM isolation in the individual patient, and guidelines exist to help in this process.

Nontuberculous mycobacteria (NTM) consist of >180 species of mycobacteria other than M. tuberculosis complex and M. leprae. They have been divided into two categories:

The predominant source of NTM organisms is still assumed to be the environment, with evidence implicating dust, soil, water and shower aerosols in patient acquisition of infection.

Due to the presence of organisms in the environment and the wide variety of clinical manifestations, diagnosis relies on a constellation of clinical features, radiographic findings and microbiological studies.

The minimum evaluation of a patient with suspect NTM-PD should include the following:

Clinical and radiographic investigations (both required):

Appropriate exclusion of other diagnoses, especially tuberculosis and mycosis

Positive culture results from at least one bronchial wash or lavage

The following guidelines have been published to aid the differentiation between contamination, colonization and infection:

Expectorated sputum, induced sputum, bronchial washings/lavage (BAL), or transbronchial lung biopsy (TBLBx) can all be used for diagnosis, with the least invasive option in the first instance

Processing of samples should occur within 24 hours of collection

NTM isolates should be identified to the species level (except for MAC), and to the sub-species level for abscessus, using validated molecular or mass spectrometry techniques

DST should be done for MAC (clarithromycin and amikacin); kansasii (rifampicin only); and M. abscessus (at least clarithromycin, cefoxitin and amikacin; and preferably tigecycline, imipenem, minocycline, doxycycline, moxifloxacin, linezolid, co-trimoxazole and clofazimine)

CXR and HRCT should be performed in all patients with suspected NTM-PD with supporting imaging consisting of centrilobular nodules, tree-in-bud, bronchiectasis (particularly in the right middle lobe and lingula), consolidation and cavitation

Although non-culture based methods are not currently recommended for the initial detection of NTM respiratory isolates, positive isolates should undergo molecular testing for correct identification to the species level, and to the subspecies level for M. abscessus complex. There is no current gold standard molecular technique that is recommended for speciation of NTM isolates.

Drug susceptibility testing (DST) for NTM should follow CLSI guidelines however it should be emphasized that its clinical value remains mostly uncertain with poor correlation between in-vitro susceptibility and in-vivo response  (with the exception of macrolides in MAC-PD). It is accepted practice that DST should occur as follows:

Additionally, for M. abscessus isolates, the CLSI has recently recommended extended incubation of isolates in the presence of clarithromycin, as inducible resistance is associated with treatment failure.

There are a number of other investigations that should be considered during the diagnostic work up of individuals with suspect or proven NTM-PD. Although the risk of NTM infection associated with CF (i.e. homozygous CFTR mutations) is well established, there are increasing numbers of reported CFTR polymorphisms, that predispose to bronchiectasis and NTM-PD.  Moreover, rates of heterozygosity for CFTR mutations within the non-CF population with NTM-PD are reported between 30-50%. As targeted therapy evolves, specific testing for CFTR mutations should be considered in the appropriate clinical setting.

Additionally, as outlined above, specific immune deficiencies are a risk factor for NTM infection.  In cases of persistent or recurrent severe infections, or in disseminated disease, further immunological investigations should be considered.  Specific tests that may be ordered include lymphocyte subsets, immunoglobulin levels including IgG subclasses, HIV serology, anti-IFNg and IL-12 antibodies, and cytokine release assays.

Epidemiological studies have demonstrated an association between vitamin D deficiency and infection with both TB and NTM, in addition to in vitro treatment studies showing that vitamin D plays a critical role in host defense against mycobacteria.  Thus, investigating for vitamin D deficiency, with supplementation if required, is reasonable.

Diagnosing pulmonary NTM infection/disease does not equate to the need for immediate treatment. Treatment constitutes an important undertaking for the physician and patient as it usually involves combination antibiotic therapy for 12–24 months. In some cases disease remits spontaneously. Indeed, lung involvement may range in severity from subclinical/ mild clinical (indolent) infection to disease associated with extensive invasion/destruction of the lungs.

Early studies of MAC disease demonstrated a variable progression of infection, but the majority of symptomatic (and some supposedly asymptomatic) patients had progressive disease, and often died as a result.

For further information on the management of people with NTM go to: When and how to treat pulmonary non-tuberculous mycobacterial diseases

Important to establish that the patient has disease

Patients respond better if treated according to the guidelines

Microbiological surveillance for response to treatment and then for re-infection

Clinical monitoring for side effects

Awareness of being a lifetime disease

In macrolide resistant MAC mortality is high without surgery and IV aminoglycosides, and similar to MDR-TB

In the early monotherapy studies of macrolides in MAC, approximately 15% of patients developed macrolide resistance by 3 months.

The two most important risk factors are:

dual therapy with a macrolide and fluoroquinolone

Patients with macrolide resistant MAC should be managed in centres’ with expertise in NTM management as surgery and prolonged intravenous aminoglycosides are usually required for optimum outcomes. 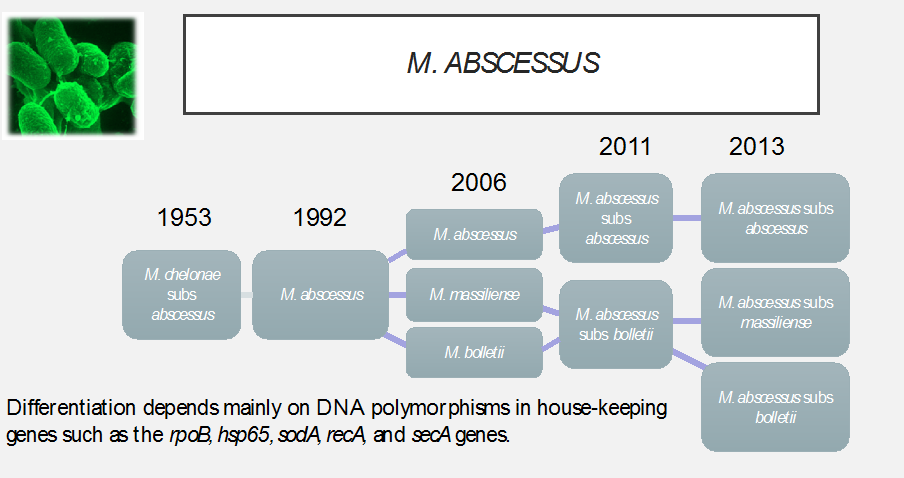 The expression of a functional erm gene in M. abscessus confers inducible resistance to macrolide antibiotics. This is determined by prolonged incubation (14 day) susceptibility testing of isolates.

Subspeciation of M. abscessus isolates generally reveals that approximately 80-100% of subs abscessus and bolletii have function erm genes, whereas M. abscessus subs massiliense isolates contain a mutation that renders the gene non-functional and the isolates susceptible to macrolides. This has been associated with significant differences in treatment success rates in published studies.

Treatment of M. abscessus infections requires a combination of intravenous and oral agents. The most current guidelines are those published by the British Thoracic Society and US and European Cystic Fibrosis Foundation.

As these infections are uncommon, there is no high level evidence to support treatment options. The NHMRC-MRFF funded clinical trial of M. abscessus infections is currently evaluating the guideline based regimen against newer treatment combinations, and clinicians are urged to refer to one of the centres involved in this study.

For other species of NTM not covered by the guidelines, expert advice is recommended.

Surgery may be useful in the following settings:

Monitoring of patients with suspected or definite NTM disease

May suffice to follow up every 3-6 months with clinical review, sputum and radiology (CXR and/or HRCT) until confident there has been exclusion of disease

Patients with possible or likely clinically significant isolates whom are not on treatment:

Close monitoring for symptoms, sputum, and radiology should occur at least every 3-6 months for up to 24 months or greater, until disease is confidently established or excluded

Patients who have an isolate that is definitely clinically significant and on treatment:

monitoring of clinical symptoms and drug toxicities every 4-8 weeks

radiology (CXR and/or HRCT) every 6-12 months

For individuals who cannot provide an adequate induced or expectorated sputum, a HRCT should be performed every 12 months with targeted bronchoscopy (wash/BAL) if required.